My last post of 2011 is just an update from my feeding station on the Moss. Compared with recent weeks Yellowhammers were few and far between, in fact so few and far between that there was only one today! I had a feeling that it was going to be a good morning for Reed Buntings when a small flock of 6 were in the hedge along the lane.

Heading down to the feeding station I had 152 Tree Sparrows accompanied by 17 Chaffinch and a single Corn Bunting. As usual I headed north along the '97 hedge' and immediately picked the Hen Harrier up flying across the wild bird seed plot. As I headed along the 97 hedge I pushed the Reed Bunt tally to 39, which is my best count for the site this winter. 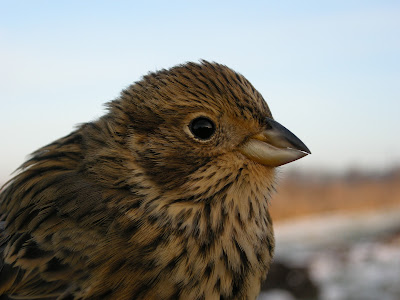 Corn Bunting
When I got onto the top fields it started raining so I decided to turn and head back towards my car again and as I did I picked the Harrier up as it flew west across the 'big field'. All I could add were a further 2 Corn Bunts and that was it.

So that's 2011 almost done. I'll update our ringing group totals in a day or three, but it's suffice to say that we have had our best year for some time. I'm not going to give you one of those end of year highlights because I don't want to bore you and more to the point I can' be arsed! All I do want to say is Happy New Year to you and let's hope 2012 is a cracking year filled with wildlife for you all! See you next year.
Posted by The Hairy Birder at 18:40

Please accept my best wishes for the New Year..
I hope 2012 is a good one for you.

Thanks Andrew. 2012 kicked off a little soggy, but I'll post about that later. Cheers, Seumus