Ian and I headed off to the pools late yesterday afternoon to have another ringing session at the Pied Wagtail roost. Pre-roost we ringed three Greenfinches and a Reed Bunting and as the sun started to set we put the MP3s on with Pied Wagtail calls and song. We ringed a respectable 14, bringing the total for three sessions to 41 ringed. It doesn't sound a lot but this is impressive for us since we have only ever ringed 18 full grown Pied Wagtails since the group's formation in 1983! However, we have ringed an additional 76 pulli over the years. 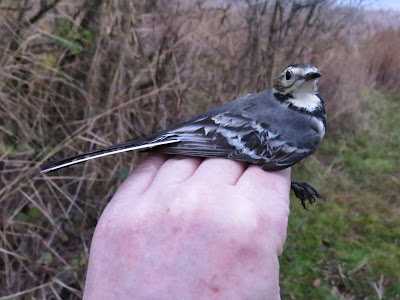 Pied Wagtail (above & below) 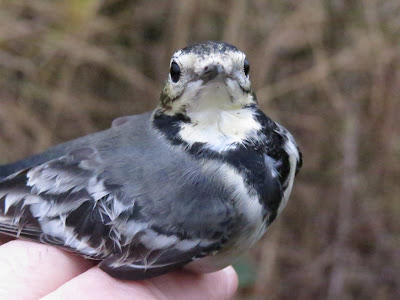 Other birds included two Water Rails at dusk and as we walked back through the reeds in the dark we put a few Snipe up.

I noted that a few Redwings were on the move last night. As Gail and I came out of the main hall at Rossall School, after attending a cracking performance of Narnia, we could here Redwings calling as we walked back to the car.

I've just had a quick look at the forecast and it looks as though we should be able to ring at my farmland bird feeding station tomorrow. Talking of my feeding station I had better pop out and feed the hungry Tree Sparrows!
Posted by The Hairy Birder at 11:03