It rained persistently last night, although only lightly, and I wondered whether Graham, Huw and Me would get out ringing at the feeding station this morning. I shouldn't have worried as we did, but it was a little murky with complete cloud cover.

We ringed twelve birds as follows (recaptures in brackets): 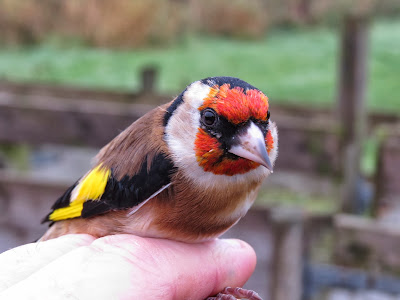 The following is an extract from the ringing computer programme Integrated Population Monitoring Reporter (IPMR) showing the details of a Great Tit that we recaptured this morning. As you can see it was ringed as a 3M, which means it was hatched in the calendar year of ringing and sexed as a male. This means that it would have hatched probably in June 2004, making it nearly 9.5 years old! Interestingly it was caught every year at the feeding station until 2008 (except for 2007) and not since 2008 until today! This is just one of many of the interesting life histories that ringing shows up.

There were a number of Fieldfares and Redwings around this morning and the former totalled 51 birds and the latter 14. A flock of 200 each of Lapwings and Pink-footed Geese went over heading south and west respectively, and raptors were represented by a single Buzzard and a Sparrowhawk. A flock of twelve Corn Buntings was a reasonable total and Tree Sparrows at the feeding station numbered approximately 110 birds.

It is a day of report writing in the office tomorrow for me but I should be able to sneak out for a bit on Tuesday, so watch this place.