I made a quick late morning call at my feeding station to drop some seed off and there were quite a few birds there. Chaffinches totalled 21 and Tree Sparrows a respectable 116. The most bizarre sight was eighteen Grey Partridges huddled together on the track. Before you think "wow that's a cracking number" they're birds released by the local game keepers and are extraordinarily tame, so they won't last long!!!

Walking back to the car I had 86 Fieldfares head north along with fifteen Redwings. Six Corn Buntings, 350 Jackdaws, four Yellowhammers and 24 Linnets were 'best of the rest' and certainly worthy of an entry in my note book.

Looking east towards the Bowland Fells I could see that there was a sprinkling of snow on the tops but not down on the lower levels. It's forecast for rain over night and into tomorrow so that snow will have gone by the morning. 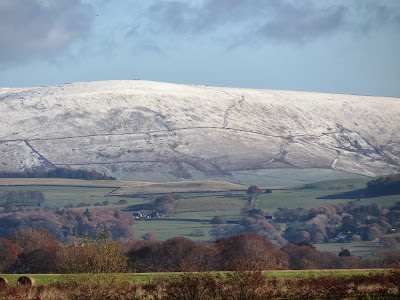 Snow on the Bowland Fells

On my way home I had a look on the river hoping for a Goosander or two but it was completely lifeless. It looked resplendent in the sun, but nevertheless it was birdless! 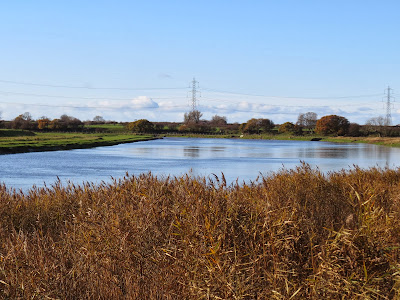 A birdless but resplendent river!
Posted by The Hairy Birder at 22:06