It was my first visit to the southern end of the obs recording area for a while and that was reason enough for me wanting to have a walk round there, but I also wanted to remove my guy ropes from the net rides. At first light I had full cloud cover with a 10-15 mph WNW wind.

I set off on my usual walk and Rails would feature in the first few minutes of my walk. I had a group of seven Moorhens feeding out on a grassed area and then I had a sub-patch tick (whatever that is?!) in the form of a calling Water Rail from the main ditch. The bird was close because it was loud, but the ditch is wide, deep and covered in lots of vegetation making viewing into it virtually impossible.

The rest of my walk was very quiet really. The only raptor I had was a Kestrel and I had 235 Pink-footed Geese dropping on to the farm fields. There were 114 Oystercatchers and 21 Curlews on the flooded fields behind the sea wall as the tide was a reasonably high 9 metres. 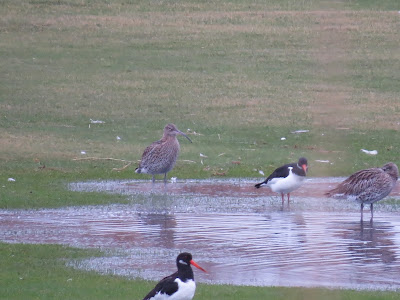 Out on the sea it was quiet and all I had were two Eiders, an Auk sp. and 105 Common Scoters so I didn't linger. I worked my way back through the hedgerows to the car and called it a day.
Posted by The Hairy Birder at 21:42