Canada has been a part of my life for as long as I can remember, mainly because of having family in southern Ontario, and over the years I have visited them a few times and done some birding over there.

I also had the privilege of spending a year volunteering at Long Point Bird Observatory, and it was after that that I became a member of Bird Studies Canada. After 60 years Bird Studies Canada has now become Birds Canada, and I have an immense respect for the organisation and the work that they do. They are very much Canada's equivalent of the BTO!

My Winter 2020 copy of Birdwatch Canada (Birds Canada's quarterly journal) dropped through my letterbox a couple of weeks ago, and amongst the usual interesting articles was one on the 'State of Canada's Birds', and this was a summary of the State of Canada's Birds 2019 report. And again it has many similarities to our The State of the UK's Birds report here in the UK, not least some of the major impacts on bird populations both sides of the Atlantic.

The report showed that in Canada some bird groups are recovering compared to their numbers in the 1970s, while others are in serious trouble. Shore birds, grassland specialists and aerial insectivores (Swifts, Swallows, Nighthawks, Whippoorwills and Flycatchers) are declining drastically. On the plus side many birds of prey species in Canada and wildfowl are steadily increasing.

One of the biggest threats to bird populations over here and on the other side of the 'pond' is climate change. Climate change threatens 66% of species in North America if we don't take action to tackle it/slow it down, or "don't siginicantly alter our course" as the State of Canada's Birds 2019 puts it.

Other common threats are neonicotinoid pesticides that hamper song birds fattening up for migration, that then delays their migration south in the Autumn. And 'neonics' are a threat over here too.

Without organisations such as Birds Canada, and other similar organisations around the world, the world would be a poorer place. Give them all the help you can....please. 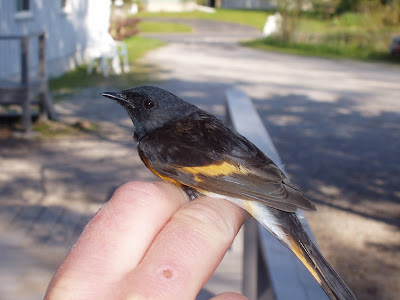 This is a male American Redstart, one of my favourite North American
warbler species, that I ringed at Long Point Bird Observatory in 2005.
Posted by The Hairy Birder at 19:14