The Not So Humble Chaffinch

I like Chaffinches, I always have. For many years, I along with other fellow ringers in Fylde Ringing Group have studied them every winter through ringing, and built up a database of movements of Chaffinches that winter in Lancashire and breed in Scandinavia. We've looked at wing length as a way of separating Scandinavian birds from British birds. As a general rule, longer winged birds within a population are generally longer distant migrants, as longer, more pointed wings create more lift for the same amount of effort. That's an over simplification, but is more-or-less accurate.

I like to think that I have my finger on the pulse when it comes to UK bird populations, but I have to admit to be taken slightly aback to receive an appeal from the British Trust for Ornithology (BTO) regarding Chaffinches, and that is why I have posted the picture below of a gorgeous male Chaffinch. 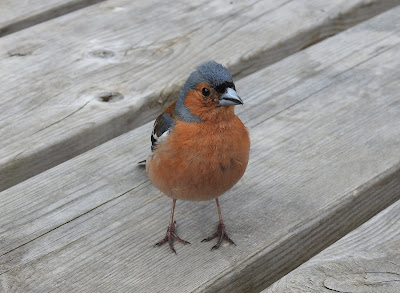 "You may be shocked to hear that our Chaffinch population is collapsing. Our most familiar of finches is vanishing from our gardens and countryside...This sudden and pronounced decline is sounding alarm bells that we shouldn't take its abundance granted any longer".

The current conservation status of the Chaffinch is Green (of least concern and not considered to be at risk) in the UK. According to the BTO the size and speed of the decline suggests that they could be placed on the Red or Amber list of Birds of Conservation Concern when the next review takes place later this year!

Chaffinches can suffer from a disease called trichomonosis, which decimated the Greenfinch population following an outbreak in 2005-06. What remains unclear is why Chaffinch numbers only started to decrease dramatically in 2012, and not when the trichomonosis outbreak first occurred amongst Greenfinches.

So, the BTO are looking for donations to support an urgent appeal for Chaffinches. Only when they know the causes of the decline can effective targeted conservation actions begin. If you feel like you can help, I know we are in testing times ourselves, you can visit www.bto.org/chaffinch. Thanks.

Talking of the BTO and Covid 19, all volunteer BTO surveyors, including ringers, have been told that no survey work is to be undertaken from now until further government advice is received, if any travel to complete the survey work is involved. So basically, if it isn't in your garden, you can't do it. Sensible.

In case you were wondering I had five moths in my garden light trap this morning; two Hebrew Characters, two Common Quakers and a Clouded Drab.
Posted by The Hairy Birder at 21:04

Shocking Seamus, at this rate we'll have nothing left to see!