At the end of last week, I completed two surveys at my wintering bird survey site in west Lancashire; a low water count Thursday afternoon and a high-water count on Friday morning.

It was a glorious afternoon on the Thursday, and it felt like the sort of afternoon where there would be a few raptors about. Nothing rare expected, but as it was warm and sunny in early Spring, I expected a few to be on the wing.

In fact, as I was getting my gear together at the back of my car, I could hear the 'mewing' call of a Buzzard, looked up and there it was displaying! You can't beat watching Buzzards displaying; closing their wings, diving, opening their wings again and pulling up calling. Magic! In addition to this first bird, I observed several individual Buzzards displaying and it was difficult to tell how many were involved, but I have entered ten in my notebook.

In addition to the Buzzards were four Kestrels making use of the warm weather and gaining height from the thermals. No other species were involved on the Thursday, but it was nevertheless a great raptorial display! 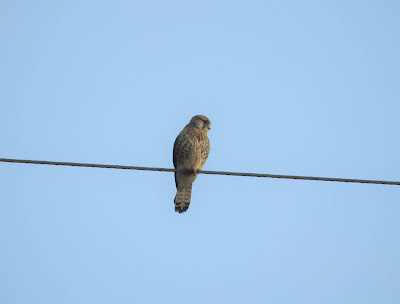 A few winter thrushes were still knocking about in the form of 24 Redwings, 33 Fieldfares and a continental male Blackbird. The only other sighting of note, and it too was encouraged by the warm sunshine was a Small Tortoiseshell butterfly on the wing.

Friday was another sunny day, but it dawned cold at my survey site with clear skies and a south-easterly wind. Raptors were again present, but not in the same number, but I did have two additional species over yesterday; a Sparrowhawk and a second calendar year male Peregrine.

Just two Buzzards and a single Kestrel today. Interestingly I had no winter thrushes, other than a single Fieldfare. I heard Skylark and Siskin going over, but as they were in the stratosphere, I have no idea of knowing whether they were singular or plural, but at least it was a sign of spring!

A number of Chaffinches were around this morning, ten, including two singing birds close to my VP. 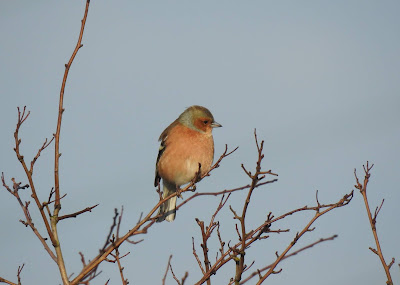 Also close to my VP was a Brown Hare in the field north of my location and sadly it didn't come my side of the sheep netting, as you will see from the picture below. 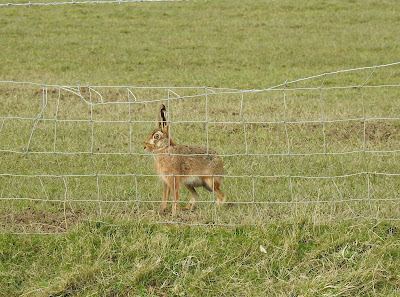 The forecast is looking grim for the next couple of days, so it might be towards the end of the week before I get out again.
Posted by The Hairy Birder at 21:22