My alarm went off at 3 o'clock this morning as I had to drive to Berwick to complete the last wintering bird survey I had to do up there. Driving there and back I had plenty of time to think about the picture I was going to post today, and I had a few ideas from Scottish castles, to butterflies, to flowers and anywhere in between!

As I was unloading my car in the dark at about eight o'clock this evening, I heard a call that sounded familiar, but yet wasn't familiar at the same time. It sounded a bit like a Coot in terms of the pitch of the call, but it was more of a trumpeting or bugling sound. A quick listen to a few Coot flight calls on-line, and bingo it was a Coot flying over in the dark, and my house is a long way from any Coot habitat.

Of course, Coots do move, and Kane Brides at the Wetland and WiIldfowl Trust (WWT) has done a lot of research into Coot movements through a programme of colour ringing, and a few members of Fylde Ringing Group helped with this locally. Through colour ringing Coots, Kane demonstrated how much Coots do move, with sightings of Coots ringed in the northwest of England from all over the UK.

The story doesn't end there. This bird was observed at its Greater Manchester wintering site in January 2013, but a month later (Feb 2013) it was at Gunknowe Loch, Tweedbank, Scotland 229 km north. Amazing!

Coots aren't the best of flyers, although they can't be too bad to move such distances, and as such they move at night to avoid being detected by predators. In fact, one of the Marsh Harriers' favourite prey items is the Coot, but of course these predators aren't active at night, so night migration is safer.

Below is the only photo I have in my archives of Coot, and it isn't the best of shots, but it very obviously is a Coot! 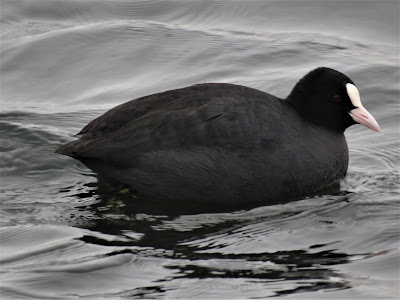 I didn't have too much of interest on my survey in the northeast this morning other than eleven Eiders, three Shags, 25 Redshanks, eleven Curlews, a Red-throated Diver, twelve Turnstones and a pair of Goldeneyes.

I didn't run my garden moth trap last night, but it's on tonight, so I'll let you know what I catch tomorrow.
Posted by The Hairy Birder at 22:00