In conjunction with one of my clients I started work on the concept of 'Dynamic Hedges' in 2013. My client tasked me to come up with a hedge mix that could provide some pollen and nectar in every month of the year, as well as supplying food over-winter for birds and small mammals. No problem there then!

Tony was very much conscious of the fact that most of our grasslands are impoverished from a biodiversity perspective, and wondered whether it was possible to increase the amount of pollen and nectar in hedges to try and compensate for this, a little bit at least.

Most hedges in the modern agricultural landscape have their origins from the enclosures period in the nineteenth century, when large areas of land were divided up and either hedges and walls were used to form the boundaries. These hedges had to be stock proof, no post & wire fencing with sheep netting and a strand of barb then, and a great deal of 'thorn', mainly Hawthorn, was used in the hedgerow mix.

Fields today are made stock proof through the use of the above mentioned post and wire fencing, and therefore hedgerows don't need as much thorn in the mix, and other species can be introduced. Although hedgerows don't have as much value from an agricultural perspective, and they probably have more value from a biodiversity perspective, there is still some value of hedges to livestock in providing shade and shelter.

I came up with a mix of 21 species of plants for the new dynamic hedges with input from our hedger, Richard, and Tony agreed the mix and we set to work planting the dynamic hedges at one of Tony's farms in Lancashire.

Below is a list and percentages of the plants that we use in our dynamic hedges:


Since the original concept of the dynamic hedges their use has moved on beyond that of just increasing the diversity, and ultimately the pollen and nectar available in the hedge, to that of climate change adaptability, carbon sequestration and even an element of re-wilding. I'll come back to this in a moment.

It is worth mentioning that the word 'dynamic' is crucial in terms of these hedges, and the above planting mix is not meant to be a 'one size fits all', this was a mix that I felt would work at my clients farm in north Lancashire where they were first trialled. The idea is for them to be dynamic and the species mix can be altered to suit local environmental factors such as soil type, climate, moisture etc.

We have had some input from academics and organisations, and the eminent ornithologist Professor Ian Newton kindly had a look at the hedges 3-4 years after they were first planted, and he was impressed with the rate of establishment and diversity within the hedge. At this stage I hadn't included Birch sp. in the mix, and it was Ian's suggestion to do so.


We organised a training day for the National Trust to give them the opportunity of looking at the hedges in the hope that they might adopt the principle of dynamic hedges on some of their properties and estates. Since the training day the National Trust at Dunham Massey is actively establishing hedges that follow dynamic hedges principles, and the specification of the hedge and their raison d'etre have been circulated widely to staff in the northwest region and nationally, and has been well received.


The National Trust said to us that "it is clear that Dynamic Hedges are well designed to help deliver NT vision for High Nature Status farming across our farmed estate as part of our Land Outdoors and Nature programme...and that the...approach to the establishment of new, species-rich hedges is endorsed by the National Trust and that we are looking at ways to incorporate...this...thinking into our management when suitable opportunities arise".

Since then colleagues of mine in Cheshire and Northumberland have been looking at dynamic hedges, and looking at ways to develop them further for carbon sequestration on farms, and perhaps a type of re-wilding by increasing the width of the hedges to 6 m.

Adaptation to climate change is also a crucial element of dynamic hedges. Plants are very slow, understandably, to adapt to climate change mianly because they can't move (or not very quickly), so establishing hedges with a diverse mix of plant species will most certainly help hedges adapt to a warming climate, and ensure that hedges are very much a part of the landscape, providing habitat for bird species moving because of climate change.

The other important aspect of dynamic hedges is disease resilience. We don't know what or when the next disease will be that could potentially affect hedgerows. Think of Ash dieback and the devastating affect this will ultimately have on hedges in the north of England, where Ash is often the main hedgerow tree. Increasing the diversity within the hedge, increases the ability of the hedge to withstand disease.

I can hear you asking why haven't you mentioned this work before? And the answer is mainly that it has been a work in progress. We wanted to see how well the hedges established and how easy they would be to manage with traditional hedge management techniques such as hedge laying. We, I say we when I mean Richard, have already layed a hedge that was only planted in 2013. It was laid just six years after planting, that is how quickly these hedges establish. Richard tells me that it was one of the easiest hedges he has laid.

More work is required, but the time is right to get dynamic hedges out there, and we are working on that with the National Trust. I just thought I would give them a shout out to readers of my blog, to help spread the word.

Below are various pictures of dynamic hedges at the farm in north Lancashire where the first of these hedges were established. 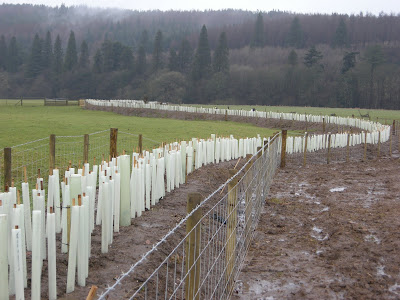 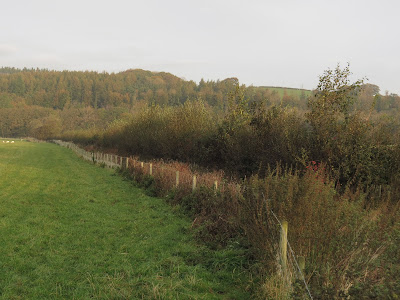 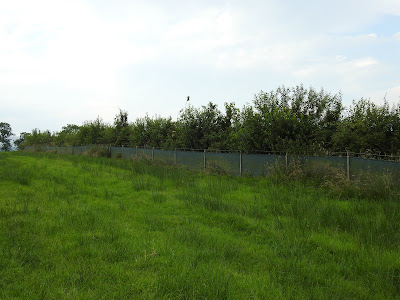 The above was a dynamic hedge planted in an exposed position in 2014, and
how it looked in 2019!


Over on the right you will see that I have updated Fylde Ringing Group ringing totals up until the end of February. Again, Linnet is the only species in double figures and the totals so far this year are solely down to Phil and Andy. The only new species added to the list in February were Wren, Blackbird, Goldcrest and Dunnock.
Posted by The Hairy Birder at 14:40

Very interesting. I've got about 80m of mixed hedging round my garden and the birds and hedgehogs love it. Mike.