I suppose I should say that yesterday morning I had 'my' first spring Chiffie, and that it wasn't 'the' first spring Chiffchaff! I was back at my west Lancs wintering bird survey site to complete the final survey for the winter, and the survey was completed under nearly full cloud cover, with a stiff south-westerly wind.

Funnily enough, the Chiffie was the first bird that I recorded singing from a hedgerow as I walked to my vantage point (VP). And it would also be the only summer migrant that I had. 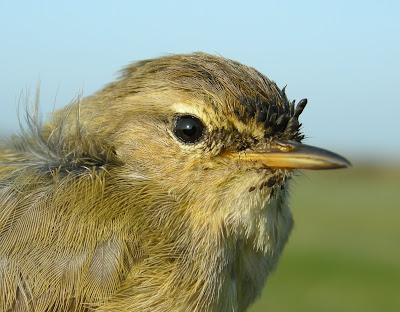 Chiffchaffs at this time of year can be carrying 'pollen horns' (feathers encrusted
with pollen close to the bill), like the Chiffchaff above that I ringed in March
2017. When these birds are foraging for insects or pollen on flowers, the sticky
pollen can become encrusted on the birds feathers. Analysis of the pollen stuck to
these feathers mainly comes from Eucalyptus and citrus plants. The birds will pick
up this pollen when foraging in plantations in North Africa, Spain or Portugal!

There were a few Meadow Pipits heading north, and it was a few, just eleven in total. As these surveys are tide related, I was surveying over low water, and didn't start the survey until 9:00 a.m. This means that any Meadow Pipits would have already been moving for close on three hours, and by this time the passage would have been slowing down.

When I left home everywhere was shrouded in low cloud, but as soon as I was a few miles inland and further south it was clear. I spoke to Ian during the morning and he told me that there were Meadow Pipits all over the golf course at Fleetwood, within the Obs recording area, and he had a grounded flock of 150 in the coastal farm fields. I also had a few Mipits grounded, with a flock of about 40 feeding in front of my VP.

The only other 'vis' that I had was a single Grey Wagtail, two Buzzards, two Sparrowhawks and a flock of calling Pink-footed Geese, numbering 46, heading high to the north. 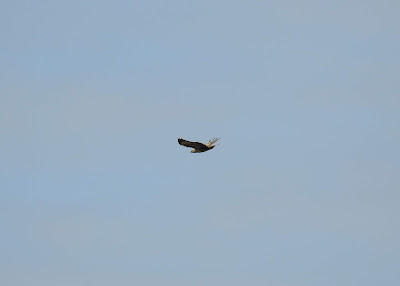 One of this morning's Buzzards

In addition to the two northward bound Buzzards there were a few local birds moving around, perhaps about seven, and two Kestrels also flew the raptor flag.

A Jay, a Raven, a singing Goldcrest and seven Shelducks were the only other birds to make it into my notebook. Of course, I did record lots of other species that I have to record numbers and activity of on the maps, but I don't want to bore you with counts of Lesser Black-backed Gulls, Jackdaws, Carrion Crows, Blue Tits etc!

Like everybody all over the world we are in the middle of a Covid 19 pandemic, and how it will impact on my ecology work I'm not sure. But on the positive side it's spring, migrants are arriving and there's birding to be done!
Posted by The Hairy Birder at 11:50