Return Of The Garden Med

Every winter since 2012 I have recorded a Mediterranean Gull in, over or around my garden, or I have seen it close to my house. What is unusual is that where I live is most definitely not the sort of habitat that you would expect a Med. Gull to over-winter in!

I first recorded it, and I will say 'it' because I expect it is the same bird based on the unusual winter habitat preferences that it has, in 2012, and it was an adult then! This makes the bird at least ten years old! 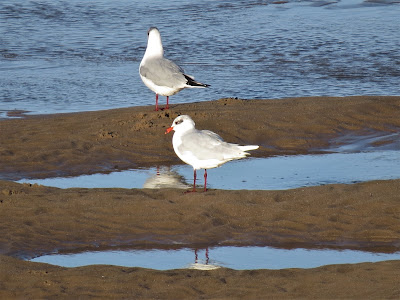 A, but not 'the', Med. Gull. Funnily enough I have never had my camera at
hand when it is apeared around my garden!

I had given up hope of seeing it this winter, but that all changed when I was approaching the mini-roundabout at the end of my road and it flew over in full summer plumage; stonking! On some occasions when it is dropping into gardens, or onto garage roofs to feed on kitchen scraps I have heard it call. It's call is one of the nicest calls of any Gull species in my opinion, and as I am rubbish at describing calls I'll leave it to the 'Collins Bird Guide' which states the "...call is a distinctive, rising-then-falling note, like  an enthusiastic, nasal 'yeah', but with a slightly whining tone".

Mmm...not quite getting it? Try listening here to a recording on the excellent Xeno-Canto website by Twan Mols.

On Monday morning I treated Gail to an hour's tree planting at the pools at the Obs. I have a number of Willows in my garden and every winter I cut them back/coppice them and any useful 'wands' that can be used for planting on again I store in a bucket of water. I had about 60-70 Willow wands and Gail and I took them to the pools to plant them to form a screen on the higher ground overlooking the newly restored scrape/pool. The idea being to screen the pool at a particularly vulnerable section to disturbance from passing pedestrian traffic. 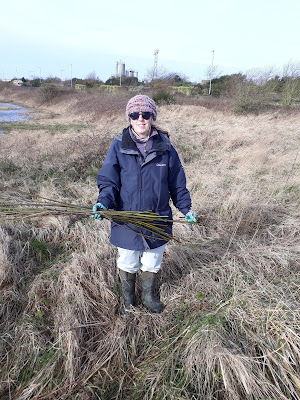 Gail with a bundle of Willows (above) and hapily planting
them below. 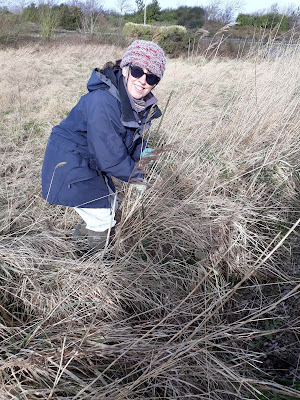 After we had finished planting the Willow wands we had a look on the pools and associated grassland and recorded two singing Skylarks, a Grey Wagtail, two Reed Buntings, two Cetti's Warblers, five Little Grebes, two male Shovelers, a Snipe, a pair of nest building Mute Swans and 22 Coots.

It will probably be weekend before I am out again, unless I can squeeze a survey in at the end of the week. Sand Martin and Wheatear at weekend maybe?