Mid-week saw me back in the northeast near Berwick, and the weather over the winter has certainly frustrated me with this site. I have never been able to plan a few days in advance when I was going to complete a survey, and it has always been a case of reacting at short notice to a window in the weather, making a quick dash through the Borders, and this was the case this week.

On the day of my survey it was the most pleasant it has been for several surveys, mainly because the wind was just a light westerly, although there was still a ground frost that challenged my toes!

It was a high-water count on this day and close to one of my VPs out on the river were eight males and two female Eiders. The light was great, and this really showed off the colours of the males. The males were displaying with their characteristic cooing display-call that the Collins Bird Guide describes as a "far carrying a-ooh-e"; a little bit like how Monty Python might caricature some gossiping fish wives in one of their sketches. I think you know what I mean. 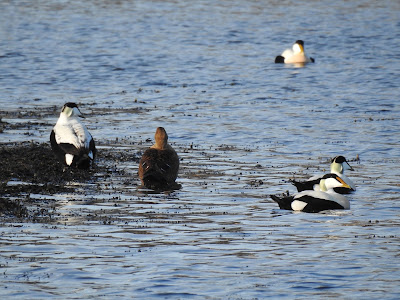 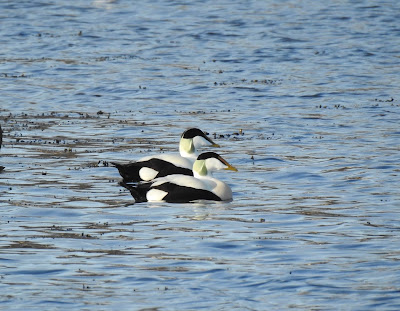 Talking of courtship and display, the Goldeneyes were equally as busy, and the six males amongst the 35 females/immatures were busy throwing their heads back onto their backs, and then stretching their necks up, with an upwards pointing bill. Marvellous!

As the week before, the female Long-tailed Duck was hanging out with the Goldeneyes, and wherever the flock went the Ice Duck went too. A couple of Shags, and adult and a second calendar year bird, floated past my VP and were constantly diving. 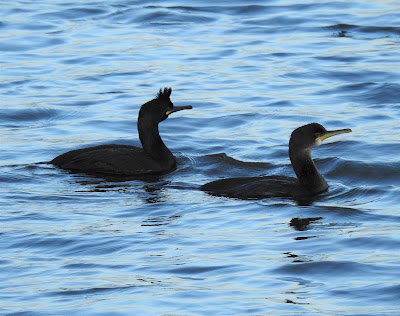 Two species of diver is always bonus and this morning it was a couple of Red-throated Divers and a distant Black-throated Diver from my second VP.

A few species of wader were moved around by the incoming tide and these included fourteen Curlews, 123 Redshanks, thirteen Oystercatchers and seventeen Turnstones.

A number of Pink-footed Geese headed northwest during the morning, 476 to be exact, and 21 Whooper Swans followed. Other than a male Sparrowhawk over the dunes, and fifteen alarm calling Linnets that were alarm calling at the Sparrowhawk that was it.

Not too bad for a survey executed at short notice!
Posted by The Hairy Birder at 19:37